Late last month, the Bing team announced the new Bing Webmaster Tools. There are several really nice enhancements and new features that have been added. One of the features that has had an overhaul is the import from the Google Search Console. This import allows you to be granular with the domains to pull in. 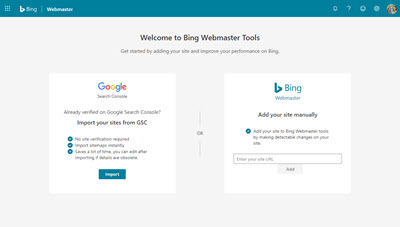 The other enhanced tools include, but are not limited to:

In addition, there are several new tools that the Bing team added:

If you are used to using the Google Webmaster Tools and never used the Bing Webmaster Tools, I highly recommend you doing both. There’s a great chance that both search tools are providing your site traffic and checking on both will help ensure that your site is represented on both equally.