In recent years, the REST architecture style has been used heavily with web services. Providers of REST web services may need to allow for multiple versions as they may have customers who cannot support a new version or may be testing a new feature. There are plenty of folks that feel passionate about whether or not versioning should take place using REST. Since 2016, there have been many enhancements to a GitHub project called aspnet-api-versioning. In this post, I’ll cover some of the latest enhancements and how to use the package for .NET Core.

To get started, you can either grab my starter project by using the GitHub link below or create a new WebAPI project by running the command dotnet new webapi.

At this point, I would assume you are familiar with loading this project in Visual Studio Code (or Visual Studio), building, and running the project. In Visual Studio Code, you can accomplish this by going into the Terminal and executing dotnet run. You’ll need to take note of the URL that Microsoft.Hosting.Lifetime is listening on. Typically it is https://localhost:5001. Since we’re using the project template, we can visit https://localhost:5001/weatherforecast to get a JSON response.

We’ll need to include the aspnet-api-versioning project as mentioned above. As of this post, they are currently on version 4.1.0. To do this, it’s easiest to navigate to your project path inside a command line and run the command dotnet add package Microsoft.AspNetCore.Mvc.Versioning.

Now that the NuGet package is added, we can modify our Startup class so that the API versioning is configured on startup like so:

If we go back and run the application, we’ll receive an error like so:

The reason we get this error is that the router is not sure which version to use. However, we can assume a default version by specifying an option like so:

Now when we execute, we’ll get our JSON response like we did above. There are other options available to be set including, but not limited to, ReportApiVersions: 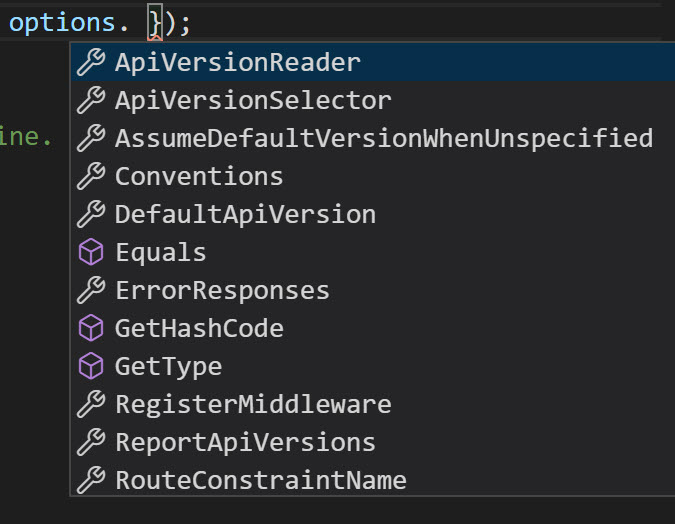 We’ll also set the ReportApiVersions value to true so we can see the value we should be using when browsing:

The above is a screenshot from viewing the application in Postman.

Now that we have version 1.0, that only helps us until, well, we need another version. So, let’s dive into our options here. For versioning, we’ll first start by setting the ApiVersion attribute and updating the Route attribute on our controller. Since we’re using the starter API, we have the WeatherForecastController that we’ll modify. The current attributes on this controller are:

This will now change to something similar to this:

We can, however, add support to our controller for multiple versions. We’d do this by stacking ApiVersion values like so:

If our controller needs to support all versions of the API, we can simply remove the ApiVersion attribute(s) and instead add the ApiVersionNeutral() attribute.

That’s great if we are versioning each one of our controllers. But, what happens if we need to override a method for a different version? Well, we can do this by using the MapToApiVersion attribute like so:

In this case, we don’t need to specify the supported API Version of 3.0 as a controller attribute. Instead, we’ll specify it just for this method value. It is good practice to include it on the controller as it will be reported as a support API Version to the client.

There may be times that you need to allow version to be specified in other ways such as in a query string or HTTP header. Let’s start with query string. Let’s assume that we are working with a client that already has our URL structure baked into their software, but they have the ability to modify the query string and hit our API like https://localhost:5001/weatherforecast?version=2.0. We can enable this by going back into the startup settings and adding an ApiVersionReader like so:

If your URL is not working properly, make sure that your controller route is back to the original state or that you support multiple routes.

We can do something similar by passing over the version in the HTTP header information by using an ApiVersionReader:

Ok. So, what do we do if we want to include both? We can do this:

Finally, there’s even a MediaTypeApiVersionReader class. This allows us to specify the media type and pass over a version. So, if we specified the ApiVersionReader like so:

We’d pass the Accept header with a value of application/json,v=2.0 to obtain the 2.0 version of our API.

Deprecating Versions of our API

To notify of an upcoming version of the API that will be deprecated, you’d add the Deprecated = true value to the ApiVersion like so:

By doing this, you’ll see it represented as a header value in Postman like so:

In this post we reviewed how to create API versioning a few different ways, We covered how to using routing, HTTP headers, and query strings to choose a version. We also covered how to announce an upcoming API will be deprecated. You can also clone my project and look to see how I structured the code mentioned above: