Last December, I cancelled DirecTV after 15 years and moved forward with YouTube TV. Since most of my home automation products are direct products of Amazon or are now owned by Amazon, I typically use Amazon Fire TV sticks to watch YouTube TV. After using the service for about a year, there are a few features that I’d like to see available through the service. These are features that should continue to set the bar even higher for streaming services.

I know that YouTube TV is constantly looking at and expanding the content they offer. But, there are some channels that are still missing that would help to solidify the service as the premier service in the marketplace.

I’m sure I’m in the minority here, but limiting to 3 screens is tough when you have a family of 6. At this point, I cannot even add another service to double to 6 screens. I’d like the ability to have more than 3 screens and would be willing to pay extra per month to add an additional stream. I know they have to cap it off somewhere, but 3 seems to be a low number right now.

One of the inadvertent features of DirecTV was the fact that their channels were generally organized. Under Channel 100 were locals. Low 200s were sports and news. Upper 200s were cartoons. Since YouTube TV has no reason to have channel numbers, perhaps a simple categorization or tagging mechanism is in order. I’d like to be able to group my channels by “Locals”, “Sports”, “News”, “Family”, “Most Frequently Watched”, and more and then organize those categories. It would make finding channels much easier.

It’s great that YouTube TV continually adds features to their service such as the integration with NFL.com Fantasy Football, as I mentioned yesterday. It can be frustrating that these settings are not available across devices. I’d like to see more of these, such as the Picture in Picture feature for Android, available in other devices.

Yes I can use Family Members to add family members to YouTube TV. I can add up to 6 family members. But, Google asks that family members be at least 13 years old. So, if I subscribe to something or would like to simply block certain channels for the younger kids, such as the premium channels, or lock down the settings menu, I should at least have a pin or required to approve on my mobile device. Nearly every other service has something at this point. It took Netflix years to add it, but it’s now there. Maybe this is yet another feature/enhancement that Google and YouTube add to Family Link and make it easier to manage overall?

Are you not yet subscribed to YouTube TV? Well, it’s simple to get setup. For a limited time, you can visit tv.youtube.com to try YouTube TV FREE for 2 weeks and also get a new Chromecast with Google TV also for free. 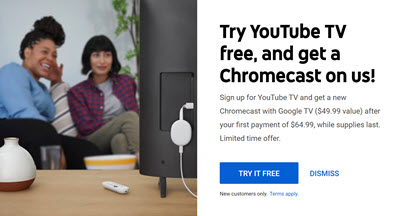