One of the recent projects I was involved in required our teams to build APIs that we’d consume in a customer facing web application. Those same APIs would also be exposed to third-party partners. However, both consumers of the APIs needed a slightly different approach. The internal team required APIs that were very granular so that they had complete control over the flow the customers would follow on the front end. This would also allow them to be quite nimble in changing direction without the need of an architecture redesign or heavy service lift. I like to call this level of APIs, micro-services. I view this as true micro-services as opposed to using that term as just another marketing buzz word. The external, third-party required “roll-up” services so that their application was not as chatty as ours.

In our case, most of our services use GET requests that return data back to the client. This is a perfect candidate for GraphQL. In this post, we’ll cover:

As explained on the GraphQL website, GraphQL is a query language for APIs and a runtime for fulfilling those queries with your existing data. You can construct GraphQL queries using a tool called Graph_i_QL. Since GraphQL is not tied to any specific database or storage engine, queries can be processed and consumed by many various technologies.

After proving GraphQL in 2012, Facebook open sourced the spec in 2015. It’s currently in use by Facebook, GitHub, Pinterest, Shopify, Lyft, PayPal, and others. You can dive in deeper directly on the GraphQL website at graphql.com/learn.

At the core of any GraphQL service is a schema which describes types and fields on those types. GraphQL can have a number of attributes and arguments. For instance, let’s assume that we’re tracking characters in episodes. We may have a type that looks like this:

In this example, we have an object type called Employee. This type contains two fields called name and appearsIn. The name field is a String type, which is built into GraphQL as a scalar type. The special character ! means that the field is required. The appearsIn field contains an array of Department type. The Department type is not built-in, but rather, defined as a custom type. Again, this array is required.

In addition to types, we can add arguments. An example of adding an argument is shown below:

Notice, in this example, that we are specifying a new argument called unit and if this value is not passed, CUP will be used by default. We can make this argument required or leave it optional like this.

There are other ways we can expand the Schema. For a more detailed tutorial, I highly recommend reviewing the schema section on the GraphQL website at graphql.org/learn/schema.

Getting Started in .NET Core

At this point, Microsoft has not released a package or framework that supports GraphQL. If you search NuGet, you’ll find several packages that relate to Graph, but those target the Graph APIs that Microsoft has released. However, you should also find GraphQL for .NET by Joe McBride and HotChocolate by ChilliCream.

For purposes of this post, I’m using Hot Chocolate. For a comprehensive workshop, visit jasong.us/34BBOMT.

The first step in this process will be to setup the .NET Core project. Create a blank directory and execute the following shell command in that directory:

Next, let’s start adding in our data classes. Create a folder in the root of the project called Data. We’ll add a class called Manufacturer and one called Product.

We also need to setup our DbContext and pull in our classes:

We’re inching closer to having our project ready to go. At this point, we just need to run our database migrations to prep our database. We’ll do this by first installing the dotnet-ef tool.

And finally we’ll run our migrations:

Now that our .NET Core app is setup, we’ll add the GraphQL package and begin setting up our query. First, let’s add the HotChocolate package:

The latest version, at the time of this post, was preview version 177 which was just released yesterday morning.

Add a new file that will query all of our products, called Query.cs in a new Graph directory:

And we’ll update the Startup.cs services to inject the GraphQL server and register the Query class we just created:

Also in Startup.cs, we’ll modify the ConfigureServices() method to add the following endpoint:

Let’s test what we’ve done to this point. We’re going to run our project and attempt to hit our graph within Banana Cake Pop. Banana Cake Pop is a GraphQL IDE which works with Hot Chocolate and other GraphQL servers. You can download it at chillicream.com/docs/bananacakepop#download.

Once Banana Cake Pop is downloaded, open it up and navigate to your GraphQL endpoint. You’ll notice that the local port will likely be 5000 for your application. We will want to append /graphql as that’s the default mapped endpoint for the graph. This can be changed by passing in a different value to the MapGraphQL() method in the Startup.cs file. After you enter your URL, you’ll want to click on the Schema icon on the left to browse the schema. It will look similar to this: 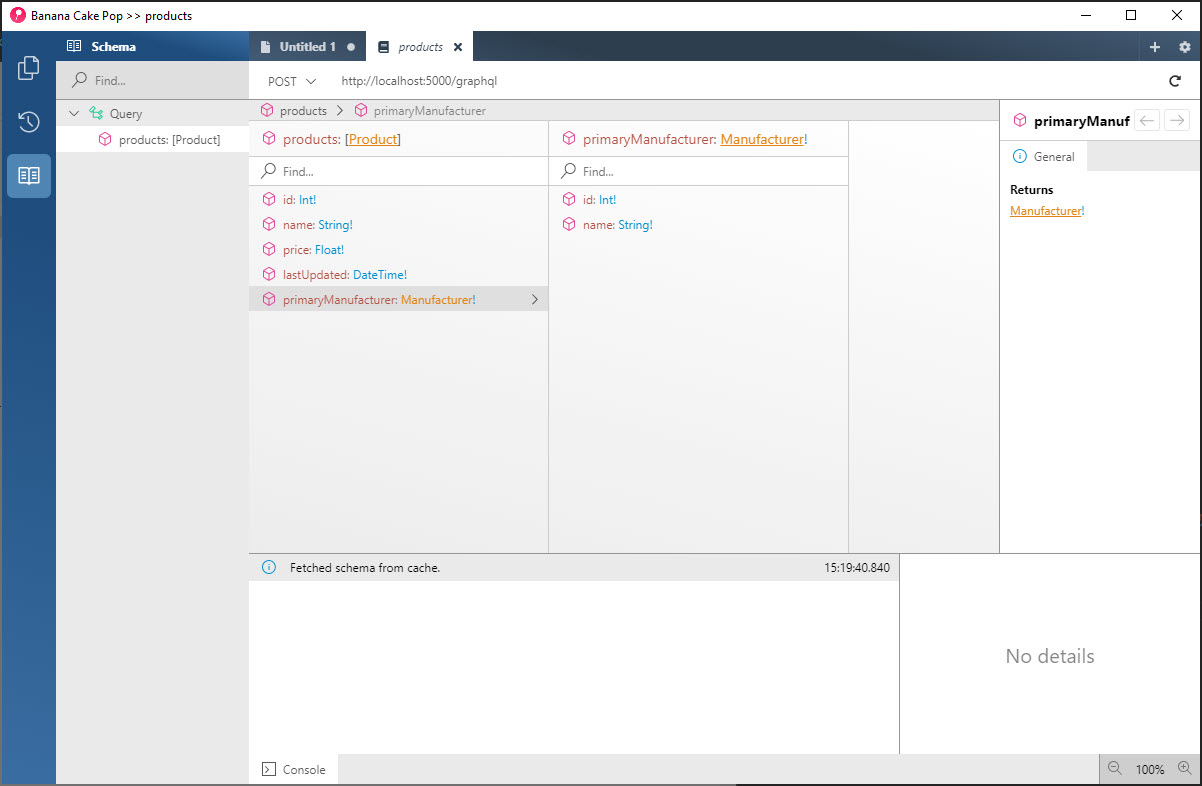 Today we learned how to get started with GraphQL by creating an empty ASP.NET application, installing SQLite, GraphQL, and Entity Framework Core, and testing our application using Banana Cake Pop. Ready to continue? Visit Part 2 to discover how to add data using GraphQL and Mutations.