There are plenty of questions to ask when looking for a static site generator. You can use the chart I have created below (click the image) to help choose along with answering the questions below. 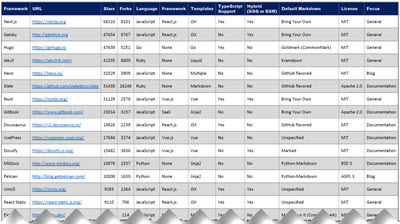 1. Choosing a Language and Framework

There may be interest in trying something new. If that’s the case, I’d look for a generator that covers your interests.

In some cases, you can do both. If you look at the chart, you can find generators that all use TypeScript. As long as you’re familiar with TypeScript, a good portion of your skills will be able to transfer from generator to generator.

Many of the generators will take a markdown file and translate it to HTML. Some allow you to use templating for reusability and several also allow you to pull in data. Then there are generators that also allow integration with several tools you may use today such as a CMS or a product tool like Shopify. The extensions will help to cut down on development time and prevent you from reinventing the wheel.

In some cases, you may need a hybrid approach and require server side rendering as well as the static site generation. There are some generators that offer this.

If you are using this for a production application, you’re going to want support. Obviously the top generators will be more widely supported than the generators further down the list. Use sites like Stack Overflow or online forums such as Discord. Also be sure that the documentation is fairly self-explanatory. Just because a generator has a “Getting Started” page doesn’t mean that it’s a great tutorial to get started.

Hope this helps point you in the right direction. Again, feel free to look at the chart that I put together.