Yesterday, Microsoft released a bunch of new Microsoft Surface devices as well as a few other products. Here is a list of the products they have announced:

Below is the scoop on each along with my opinion.

The Microsoft Ocean Plastic Mouse is more than just a mouse. This particular mouse is about our environment and its plastic shell include 20% recycled ocean plastic. This eco-friendly mouse is also packaged in 100% recycled packaging. Besides using Bluetooth 5.0 and having up to 12 months of battery life on a single AA battery, this mouse comes with an ocean-inspired theme pack for your Windows desktop. Finally, this mouse is compatible with Windows 8.1, Windows 10, and of course, the upcoming Windows 11 Home and Windows 11 Pro editions. The device is available for pre-order and will be in most markets on October 10th, 2021. The price in the US is just $24.99.

I most likely won’t switch anytime soon as I prefer the Sculpt mouse. However, if I need an additional mouse, I’ll look into this more.

The Surface Adaptive Kit has yet to show in the Microsoft Store so it’s price and available date is unknown. The only feedback that Microsoft announced is that it will be available later this year. This kit will include key cap labels, bump labels, port indicators, and device openers. The key cap labels and bump labels will help to identify important keys. The port indicators make it easier to find the appropriate port. The opener includes a pull tab and ring and makes it easier to open a Surface lid or kickstand. Microsoft continues to show they are leading efforts to support people with disabilities. Kudos to Microsoft for this announcement and despite many of the articles you’ll find, I feel this is one of the more important announcements.

The Surface Duo 2 is already receiving some pretty good reviews. It seems that many analysts are touting this as the Surface Duo they’ve been waiting for. I feel that’s a bit bold considering there were only a few major updates to the device. First, like it’s predecessor, this device has two screens. It now supports 5G and has a triple lens camera for better photos. It’s difficult to tell how much better this camera will be than the first version so we’ll have to see. One of the most interesting enhancements is the notification area that is now visible in the rounded part of the screen when the device is closed. At a price starting at $1499.99 for the 128GB SSD model, it will be interesting how many Duo devices will be sold. The 8GB RAM with 128 GB SSD and the 256 GB SS ($1599.99) models are available for pre-order and will ship for October 21st, 2021. There is a 3rd configuration with includes 8GB RAM and 512 GB SSD that is not available yet and will sell for $1799.99. On the surface (no pun intended), I think the jury is still out on the Surface Duo.

The Surface Go 3 will be released on October 5th, 2021 and will come preloaded with Windows 11. Starting at just $399.99, the Surface Go is a great tablet that can function as a laptop as well. The biggest question I continue to have is if the bump from 4GB RAM and 64GB SSD is worth the extra $150 to bring it to 8GB RAM and 128GB SSD. You can then bump the proc from an Intel Pentium 6500Y to an Intel Core i3 for another $70 ($629.99). Don’t forget that if you qualify as a student, teacher, or military personnel, you can qualify for up to an additional 10% off.

This is where I’m conflicted. The Surface Laptop Studio appears to be the replacement for the Surface Book line. It’s a unique laptop that has a different hinge than the Surface Book and allows 3 positions for the Surface. While the new design is nice, the hardware specs still leave much to be desired for some developers. I’m currently rocking a Surface Book 3 with 32 GB RAM, 1 TB SSD, and NVIDIA GeForce GTX 1660 Ti. These specs are not too different from the Surface Laptop Studio. In comparing this to the Dell XPS 15, developer build times in Visual Studio and with command line builds (i.e. Angular) takes up to 60% longer. The biggest difference seems to be the fact that the Dell XPS 15 offers a 6-core i7 and an 8-core i9 as opposed to leveraging the 4-core i7. This was one of the concerns I had prior to the event and remains a concern going forward especially as Microsoft touted the device during their event and continue to do so on the Microsoft Store.

Starting at $1599.99, this is a very sleek device. There are numerous models and hopes are that an i9 is available at some point in the coming months. You can pre-order now and receive beginning October 5th, 2021. 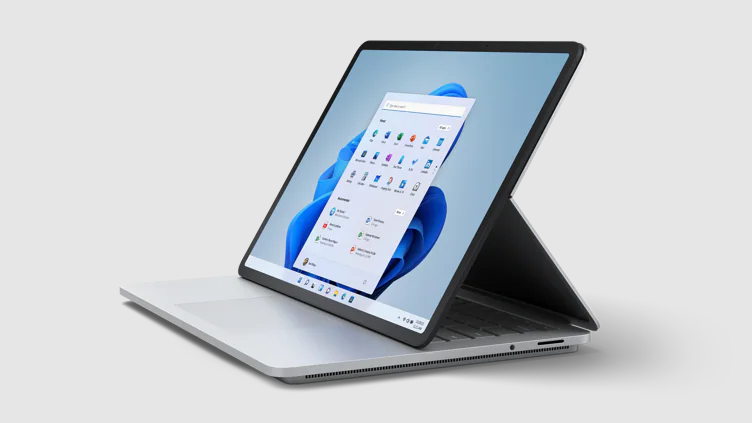 The Surface Pro X is the thinnest and lightest Surface Pro device. The difference between the Pro X line and the Pro line is that the Pro X has an ARM processor. Starting at just $899.99, this machine is almost as powerful as the Pro 8. Like all of the other Surface Pro devices, this will come preloaded with Windows 11 if you purchase the Wi-Fi only model. If you purchase the Wi-Fi plus LTE model, you will receive Windows 10 and a free upgrade to Windows 11 later this year when LTE plus is available.